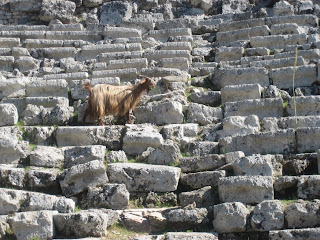 We arrived in port at Marmaris, Turkey this morning. It's a beautiful area - lots of pine forests, steep slopes, colourful villages. We took a bus to Dalyan, which is in a conservation area. Along the way we enjoyed the beauty of the landscape and learned, among other things, about the wonders of pine honey. Many honeybees in this area of pine forests. We saw fields of cotton, citrus orchards, sesame seeds being harvested, pomegranate groves and other crops. It appears to be a prosperous area, but there is much less traffic than we've seen elsewhere. There is a lot of highway construction to widen the roads.
At Dalyan we boarded small boats for the trip to Kaunos passing amazing Lycean tombs carved into the rock walls high above the river. At Kaunos we had a long walk up to the ruins of this former seaport of pre-Roman times (until the harbour silted in). The ruins and particularly the amphitheatre was quite amazing and we disturbed a mountain goat grazing among the 'bleachers'.
Back at the ship we watched the beautiful harbour recede and a few hours later arrived at the Greek Island of Rhodes. It has an ever more amazing harbour. Very beautiful, surrounded with crenalated walls and buildings like something out of the middle ages. The harbour was very beautiful at night with all the lights.

We've been enjoying professional entertainment in the lounges every night. Tonight many people went ashore, so the pros took the night off and the amateurs among the cruise staff put on an excellent show. Then it was time to turn in early for tomorrow is very early departure on our Rhodes tour.
Selected Photos of Turkey sites
Posted by Janice Hatt