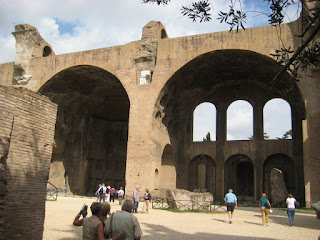 A bright & early start, packing up, breakfast at the hotel and off to the Metro to findo our way to the Colosseum - easy and pleasant. The Rome subway is modern, clean and smooth. The Colosseam is very interesting - it has stood for nearly 2000 years in spite of fires and being looted for building materials. A major restoraton is underway. We wandered then went into the major mid-city Palatine ares of ruins. It is vast, and once away from the edges, quiet and peaceful. There are tall trees and shady areas. A lovely museum of recovered artefacts - statues, mosaic floors, and wall sections, etc, from several different areas. We enjoyed wandering among the half and fully ruined walls and buildings.
Steps of many kinds and paths. Around lunch time we made our way back to the metro and to the hotel.
That's when the fun began. The concierge conveyed a message from the shuttle company that there was a rumour in the Port that our ship, the Braemar, had been diverted to Salermo, the Port of Naples. So we called the ship - busy signal repeatedly for 15 minutes - tried Fred Olsen offices in London and our call was put on hold and eventual dropped.
Finally we decided to simply go to the port as scheduled. When we arrived, a Fred Olsen rep. met us with the news that the ship was actually in Palermo, Sicily and we'd be joining it there. With 2 other couples we were driven to the Rome airport, handed tickets by another rep. and proceeded to check in.
Then it got interesting again - we had not packed for domestic flights with very limited luggage allowances, and instead of simply paying for the overage, the rep insisted we repack, right there in front of the line! Embarrassing to say the least, and since didn't really didn't understand the object of the exercise, somewhat futile. In any case we finally satisfied the agent. Then we were told to run! because the flight was boarding in 5 minutes. Security, fortunately was a breeze, and we got to the boarding area in plenty of time to join the line and board. In Palermo we were once again met by cruise line reps who showed us to our buses. There were people coming in on several flights, including those who had had to make their own way to Palermo from places like Barcelona, Spain.
So we waited onboard the bus for about 45 minutes, then a 50 minutes drive brought us to the ship, arriving about 8 PM. Check-in was quick and we found our cabin easily. We are most favourably impress with the accomodations - lots of space, closets, drawer, comfortable chairs, TV, fridge, etc. Finally around 10 we went for dinner as the last few passengers were arriving from the airport. It was delicious and the service was terrific. This is a lovely ship. We'll explore it more thoroughly tomorrow, though it will not be a day of cruising as planned but back to Italy mainland, Reggio di Calibrio, for the ship to replenish while we wander around town. Selected Rome Photos
Posted by Janice Hatt