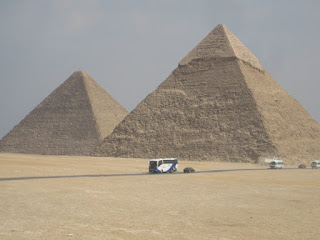 The first impression of Port Said was the smell of charcoal. Since we had to be ready to go ashore at 6:30, we were up at about 5:15. Imagine everyone's surprise at the announcement that Egypt had ended Daylight Saving Time a bit early, and so it was really only 5:30! (Larry got up at 5 to watch the approach to the Suez Canal...that turned out to be 4am!).Many people were very upset by the error, but we just relaxed and
watched the docking process. Making our way to the buses gave us our first exposure to the aggressive Egyptian hawkers. Yikes! But it is a develping country, and I guess they have families to feed. The long ride to Cairo through the Sahara was interesting. Much of this edge of the desert is being reclaimed for agriculture, but to our eyes it is still vast and drab. The Suez canal parallelled our route but we couldn't see much of it. The traffic was pretty heavy, but we had a police escort and cross roads were blocked by police so our convoy of 15 busses could sail through (it helps to have police with a siren up front who radio to police ahead to block crossing traffic). Security was heavy and armed guards evident everywhere.

Traffic in Cairo itself was chaotic but our driver was masterful & we seemed to get through it just fine, eventually crossing the Nile to Giza and arriving at the pyramids which turn out to be just around a corner from Giza).
For the first time, neither of us was surprised by the size of the pyramids, but Larry expected the sphinx to be bigger. We were a bit surprised by the good condition of the pyramids, particularly the part at the top of one of them that still has most of the outside covering on it. The whole area is interesting, with many smaller pyramids and desert stretching away. Again, there were aggressive, annoying, almost frightening vendors and security people taking money for anything you could guess.
Larry went into the middle of one pyramid, an experience he ranks with the last 5 miles of his marathon -- no air, little light, no space, nearly crawling to get through the passage with hundreds of other people., many turned back along the way. Janice stood by for photos and the security people kicked her out 4 times before she actually got the shot -- always have a dollar bill handy in these circumstances. There were also lots of camels and their drivers offering rides &/or photo ops. We took a pass on that but enjoyed watching.
At the sphinx we wandered through one of the funerary chambers. This adds a dimension to everything we've read about the preparation of mummies and the associated rites.
Leaving that area, we went for lunch at a former palace which is now a luxury hotel. Beautiful & delicious. Then to the museum. The building is certainly not impressive but oh goodness! the displays! We had seen the King Tut exhibit in Toronto in December 1980, but that was a very small part of the treasure we saw here. As well, of course, we were able to see treasures from many of the thousands of other archaeological sites in Egypt. Crowded, hot, noisy, stuffy, but very well worth the visit.
On the trip back to Port Said we passed through truly appalling slums in central Cairo. What a contrast to the luxury hotels and embassys, etc. Half-finished buildings (no finish/no tax) , garbage everywhere, building rubble that may be either a collapsed building or a building site, donkey and pony carts among the cars and trucks. Most women wear long skirts or pants, long sleeves and cover their heads. A few wear full covering with only a slit for their eyes, or a veil. Others, like our guide, wear western dress and no head covering. There are many styles of head covering, many quite beautiful, and it's interesting to see display in store windows of western style dress but with scarves over the head of every mannequin.

Coming back to the ship in the dark, we once again had a security escort. We could see the lights of several ships in the Suez Canal. We were tired and dirty, and still had to run the gauntlet of hawkers at the pier. Security stopped the xray machine for about 5 minutes, leaving us standing waiting while vendors harrassed us -- apparently just because they could. Cairo may not be a place we yearn to return to, but it was certainly worth the visit.

A quick dinner, very enjoyable 'Big Band' show in the lounge and early to bed.
Selected photos of Egypt