Tuesday, October 14 - Malta - Good luck to all of us on Election Day 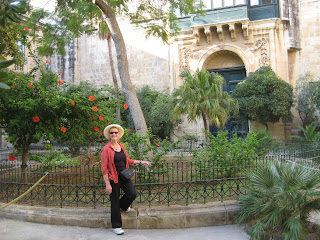 Early morning found us tying up in the harbour at Valetta, Malta. We went ashore after breakfast and took a bus into town. It's a lovely little city! What contrast to Port Said, Egypt! We strolled the main street, drank some cappucino and did some shopping. We caught the bus back to the harbour and had lunch at café on the wharf, where Larry was successful at linking to internet service but was unable to upload photos.

Back on board we got ready for the afternoon excursion around the island of Malta. We visited a botanical garden around the Presidential Palace, then a craft village that is housed in buildings on an old RAF base from WW2. The filigree-making and glass works were very interesting to watch and we did buy a few things. After that, we went to a local winery, also on former RAF land ( a torn-up runway is part of it) and sample white and red wines and local cheeses. Yummy!.

Then on to Moska to visit the beautiful domed church. A bomb came through the dome during the WWII, but it failed to explode and non of the 300 or so worshippers was hurt. This was considered and documented as a miracle by the parishioners.

Back aboard we were ready for a bit of rest before the Captain's Fairwell Cocktail Party, and final formal dinner - including a parade of servers in the dark with baked alaskas topped with giant sparklers - very impressive and fun. Later the evening show was put on by the ship staff. Also fun, including some Philipino dancing and singing as well as a rousing rendition of YMCA and Chippendale sendup that was a 'Half Monty'.

The bad news did go around today that the gentleman who was medivac'd the other night died in the hospital.
Selected Photos - Malta