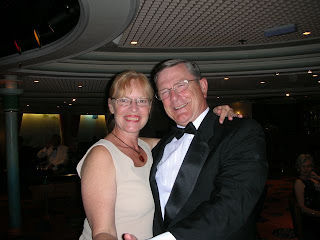 The first of two consecutive days at sea, so time to relax and recuperate from all the touring. Unfortunately, we hit rather rough weather early in the day, and many people became sea sick. Both of us felt it, but made it through without incident. Enough onboard activities to enjoy ( quizzes, bingo, port lectures ) but the evening show was cancelled out of concern for the safety of the dance performers. Instead, a rather good vocal concert was given by 2 of the regular show performers . Also most decks were closed because of gale force winds and spray.

Late in the evening there was the high drama of a med-evac event. With the bad weather and no helicopter landing space, it was all quite dicey, but was successfully completed in short order with a stretcher/cable procedure. From the first ship-wide page (`Code A Gold') to the departure of the helicopter to Crete was under 2 hours.

Select "Older Posts" below to continue