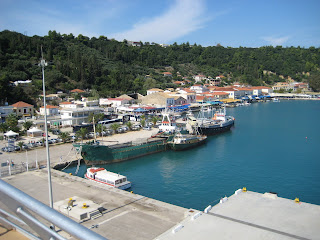 We slept in a bit this morning, so had to hustle to have breakfast before Larry went to a shore talk and Jan to line dancing followed by a quiz session. Didn't entirely disgrace myself in spite of the very British bias of the quiz. Then a quick lunch and off to Olympia. This site, the original start of the Olympics in about 275BC, is entirely ruins with the exception of the stadium. Three thousand years ago there were no seats for spectators, just gassy slopes and those are intact. We saw where the torch is lit for every modern Olympic games and learned that the ancient 'games' were very different and part of a 3-month truce from continual waring every 4 years. The museum holds stunning artefacts from the site. Then are largely preserved because it was inundated and covered in mud for more than 10 centuries. The port town of Katakalon is small but colourful and we enjoyed the beautiful view of its harbour from the ship. While we were at dinner the sun set most spectacularly. We enjoyed a spectacular 'Vegas-style' performance of music from the movies and then another quiz session before bed.
We enjoy seeing how the staff set up our bedding twice a day. My night gown is always laid out in some fancy way ( wish I'd brought classier lingeries!! ) and the pillows, duvet, bed spread etc arranged artfully.
Selected photos of Katakalon & Olympia
Select "Older Posts" below to continue
Posted by Janice Hatt