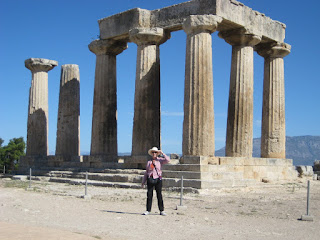 We keep picking the excursions with early starts! Today we got tangled up in Athens rush hour traffic as we made our way from Piraeas to Corinth. Once out of the traffic, though, we drove along the Aegean Coast to the Corinth Canal. It is an amazing feat of engineering, linking the Aegean and Ionian Seas; they had to dig through 6km of rock more than 100 feet high.

At Corinth we saw the ruins of the very cosmopolitan city where St. Paul stayed for some time. On then to Mycenae, with its cyclopean walls made of very heavy blocks of stone stacked in various ways. There are two ancient cemeteries there, where a great deal of treasure has been found. Larry climbed to the top ( acropolis),but I stayed low down to watch. Then we visited the Tomb of Agamemnon (so called ) which has an interesting beahive shape, but was empty when discovered. We then had a lovely 5-course mid-afternoon meal in a large restaurant before returning to the ship. We were tired and it was a bit late, so we didn't go to the dining room. Instead we had a later dinner in the buffet, followed by a show in the lounge where we enjoyed the company of a couple from our dinner table.
Selected Photos of Corinth & Mycenae
Posted by Janice Hatt