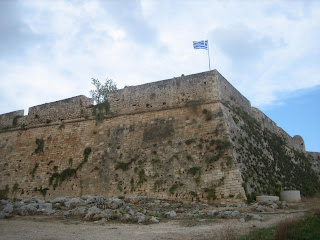 It was a fairly early start to catch the bus tour to Rethymnon. Our guide was very pleasant and easy to listen to. She pointed out and explained the geography of Crete and gave us a brief summary of the history of the island. Our first stop was Fortezza Castle, a Venetian structure whose walls are largely intact, but the buildings are in ruins. The views are fantastic. The museum in the castle contains many new finds, which show that Crete was at least visited, if not inhabited, much earlier than had been thought.

We couldn't photograph most exhibits because they haven't been published yet, but they were so well-organized and displayed that they really told the story. After the castle we walked through this lovely, colourful town, enjoying the architecture and flowers as well as the shops, etc. I bought a necklace, since I've broken 2 that I brought with me. The waves were really breaking over the walls in the harbour, a bit of a preview for the evening on the ship.
The high wind was blowing spray as well. Back onboard we enjoyed a late lunch and admired the views from the decks, though the high winds make it uncomfortable. in the open. We took coffee outside and it actually blew out of the cups! I joined a bingo game in the afternoon and was just 1 number away from a £70 jackpot. We went to a short church service, then dressed and went to dinner. During dinner we left port and immediately started pitching around. Making our way to the comedy show was a challenge and the comedian actually couldn't do parts of his show. He ended with a rather burlish and raunchy version of Rindercella which we enjoyed. By then we decided that our cabin was the safest place to be with the rolling and pitching. The captain hopes we'll be into calmer seas before midnight. Luckily, neither of us is suffering at all from the motion.
Selected Photos of Crete
Posted by Janice Hatt